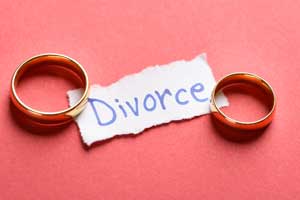 Relationships end with death or divorce. Legal fees and taxes are certain:

Many relationships sour, once the excitement of the courting is over and the realization of the limitations of the partnership sets in.  Sometimes this turns ugly (or the partner does?) and ends in litigation, often highly emotionally charged and sometimes just plain vengeant.  A solid pre-nup can mitigate the damage and set out the rules, but even so the process of divorce often leaves both parties feeling cheated.  Legal and other advice means that neither side really wins, and the pie that remains to be shared is smaller than the pie before the divorce. The destruction of value is worth the ability to chart a course independently of the other party going forward.

Even when the other party is not even contesting the separation, divorces are never simple.  This applies to dissolving a marriage, a customs union or a commercial arrangement.  Look at the Bezos divorce, Brexit or the Growthpoint BEE dispute as examples.

The reasons for a BEE relationship no longer working are the same as in a marriage – a party disappears; the enthusiasm goes; better prospects beckon; expectations are not being met or consummated; trust breaks down; or it is simply a waste of time.  This happens even when there isn’t a guilty party.  Sometimes it’s not working.

Undoing a BEE deal is very different to a divorce:

We’ve recently seen a number of cases where the aggrieved party in a BEE deal decides to get rid of the annoying partners, mistakenly thinking that the decision to do so is all that is necessary. Not so much.

There is one huge difference between a matrimonial relationship and a shareholder relationship: if one party wants a marriage to end, the other can’t save it.  The mere fact that someone wants to leave a marriage is evidence that the marriage has irretrievably broken down – a recognized ground for divorce.  So, staying married is as much of a choice as marrying.  Married people chose to stay married, even if its unhappily ever after.

In shareholding relationships there is often no such choice, especially when the shareholders don’t agree.  The unhappy partner in the BEE arrangement cannot simply chant “Go Away” three times or hope on a wing and a prayer that the other side will just slip into the sunset.

Firstly, for the BEE ownership points to be claimed the Black Person has to be the shareholder in the register (yes, this discussion ignores options and the BEE rules around them).  There may be contracts between the parties, but no matter what, a shareholder gets rights from a company’s Memorandum of Incorporation, Company Rules and the Companies Act.  Some of these rights, especially those in the Act cannot be taken away.

So, to be clear, if a shareholder hasn’t paid a seller for some shares, the seller may sue for payment, but he cannot simply take the shares back.  The registered shareholder is entitled to some rights and can claim these from the company, directors and other shareholders just because he is a shareholder.  It does not matter how one seduced and enticed one’s spouse into marriage, the spouse has special legal status just because they are the spouse!

How to get out of a BEE ownership deal:

In undoing any shareholder relationship, the basic objective must be to get the shareholder’s name out of the register.  This must follow the correct process or it will simply be put back (and other claims may still follow in respect of, say, lost dividends or legal fees).  It’s important to seek advice to ensure that this is done properly.

Simply put, the exiting shareholder needs to be part of the process and will be paid to leave in one of the following ways:

Either way, the exiting shareholder needs to agree to this and needs to be paid.

The exiting shareholder needs to pre-agree to this and needs to be paid.

The exiting shareholder needs to pre-agree to this and needs to be paid.

The exiting shareholder needs to agree to this and needs to pay.

The exiting shareholder agrees to this (as he initiates the process) and needs to be paid.

What about trying to make it work?

As we’ve shown above, one party cannot simply remove another because they don’t like them.  Parties need to negotiate their coexistence and how they will exit from the relationship. Obviously, this is better done long before things fall apart.

Sometimes working on the relationship will yield the best results and this often starts with listening to and talking with one another.  We are no counsellors but why doesn’t the existing relationship work?

As highly experienced experts in BEE and other shareholder transactions, we’ve taken extensive care to make sure that our agreements include very clear clauses that determine the rights of parties and the process to be followed in a potential divorce. These are standard in every deal we do and are agreed up front. The most NB thing however, is the setting of expectations as to what happens after we invest in a business, as its against these expectations that reality is always measured. Both parties are far more likely to be happy if people do what they say they’re going to do.